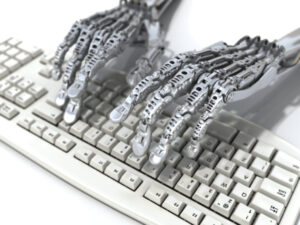 Our news and activity streams are buzzing with articles, blogs, analyst reports and social media hype around the topic of “AI”. It’s a fairly loosely defined topic that covers an enormous spectrum of disciplines, from big data and predictive analytics, to machine learning, natural language processing, automation and robotics. Depending on who you listen to, it’s either the most important technological breakthrough since the invention of electricity, or it heralds the end of civilisation as we know it! Extreme scenarios are most certainly fantasies and should be discounted. The most likely outcome is neither extremely negative nor extremely positive.

What tends to focus our attention are the stories about how AI and “intelligent” machines are replacing roles, jobs, or even professions. What is the real truth behind these stories?

There is no doubt that workplace automation is becoming more widespread, and today’s AI-enabled, information-rich tools are increasingly able to handle jobs that in the past have been exclusively done by people (including tax returns, language translations, accounting, even some types of surgery) – automation is destined to have profound implications for the future world of work.

McKinsey recently reported that 30 percent of activities for 60 percent of occupations are now technically automatable.

Recent advances in robotics, machine learning, and AI are pushing the frontier of what machines are capable of doing in all facets of business and the economy. Physical robots have been around for a long time in manufacturing, but more capable, more flexible, safer, and less expensive robots are now engaging in ever expanding activities and combining mechanisation with cognitive and learning capabilities—and improving over time as they are trained by their human co-workers on the shop floor, or increasingly learn by themselves.

Massive amounts of data that can be used to train machine learning models are being generated, for example through daily creation of billions of images, online click streams, voice and video, mobile locations, and sensors embedded in the Internet of Things. The combination of these breakthroughs has led to spectacular demonstrations like DeepMind’s AlphaGo, which defeated a human champion of the complex board game ‘Go’ in March 2016.

New milestones are being achieved in numerous areas, often with performance beyond human capabilities. In 2016, for example, Google’s DeepMind and the University of Oxford applied deep learning to a huge data set of BBC programs to create a lip-reading system that is more accurate than a professional lip-reader.

There are numerous examples of how machine learning is being used to augment human decision making in healthcare, aircraft maintenance, oil and gas operations, recruitment, insurance claims processing and law. There is barely a sector that is not engaged in some way in exploring the use of AI and automation technologies to improve productivity or accuracy.

One of the more practical roles for AI over the past few years has been to automate administrative tasks and decisions. Companies typically have thousands of such tasks and decisions to perform, and it was realized that if they could be expressed in a formal logic, they could be automated. A key feature of this type of automation is machine/deep learning and robotic process automation (RPA) – which, contrary to its name does not involve actual robots; it makes use of workflow and business rules technology to perform digital tasks.  The technology makes it relatively easy to automate structured digital tasks that involve interaction with multiple information systems.

So, what does all of this new technology mean in terms of jobs? Most analysts are agreed that whilst many routine tasks and functions – both physical and cognitive – are being automated, this does not necessarily mean that we are heading for mass unemployment as the machines take over. Perhaps one of the most extensive research programmes into the impact of AI on jobs and skills has been undertaken by Nesta. It has published its findings in the report:  The Future of Skills: Employment in 2030. Well worth a read. The report highlights that:

Perhaps the last word on where AI and automation is having (or will have) the most impact should go to Gil Press at Forbes, who identifies the sectors and functions as follows:

He goes on to say:

“There is no question that we will continue to see in the future the same disruption in the job market that we have witnessed in the last sixty-plus years of computer technology creating and destroying jobs (like other technologies that preceded it). The type of disruption that has created Facebook and Tesla. Facebook had a handful of employees in 2004 and today employs 20,000.  Tesla was founded in 2003 and today has 33,000 employees. Whether AI technologies progress fast or slow and whether AI will continue to excel only at narrow tasks or succeed in performing multi-dimensional activities, entrepreneurs like Zuckerberg and Musk…will seize new business opportunities to both destroy and create jobs. Humans, unlike bots and robots (now and possibly forever), adapt to changing circumstances.”

One thing we can be sure of: the rate of change will continue to accelerate, and if we wish to remain relevant in our chosen professions, we need to identify and refine the skills that can’t easily be automated, for example: flexibility, imagination, intuition, empathy and creative ability. Distinctly human skills I think you will agree.

The slides are from a recent ‘Breakfast Briefing’ as part of Workplace Week and in aid of Children In Need. The event was kindly sponsored by Norton Rose Fulbright and Warwick Business School’s Knowledge & Innovation Network.

The Impact of Automation & AI in the Workplace from Collabor8now Ltd